I have a ”problem” with my 1992 Viper……
It starts and run perfect, but then during driving I get the reading on the dash “Alarm set”….it does not affect the car or anything and after 5-10-20 minutes it disappear again…..sometimes this reading comes up 2-3 times on a 1 hour trip…..
Can get it to disappear by turning the ignition off and then on again…….


Any suggestion of what could be wrong……
M

Does it have a secondary alarm on it? Like, the "Viper" alarm system? I've seen a Viper like that. They overrode the original factory system with the aftermarket installation, and the OEM one was constantly "set" and freaking out while the car was running. It was unable to immobilize the car, though, because it was modified to allow the "Viper" alarm to control things.

How many times does it flash? Does it flash in any discernable pattern? Like, a number of long flashes followed by shorter flashes, for example. Pre-OBDII cars communicate problems by flashing codes on dashboard lights. My old Miata, for example, was able to tell me the the reason it wouldn't start was because of the camshaft position sensor just by flashing a diagnostic code to me.
L

I had the same problem and the next stage was that it sometimes would not start . In the end I pulled the connector under the dash after speaking with Chuck as it was really freaking me out. A word of warning though, if you go down this route make sure the engine is running when you pull the connector otherwise it will be permanently in imobilised mode.
OP
OP
V

Do not have a secondary alarm on top......all original.
The "alarm set" do not flash at all, just lights up on the dash and goes away again after a while......usually comes up during my drive without me doing anything at all, but then yesterday it lighted right up when I opened the trunk using my second key while the engine was running....COINCIDENCE...? 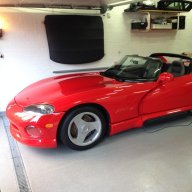 Sounds a little odd...but, who knows with these alarms.

Unless you are in NEED of an alarm, I would disable it to avoid getting stuck sometime. There is a factory procedure for the disconnect.

I have the shop manual for the 1992 edition, can I find the how to disable in there ?

No, it was covered in Viper Tech training manual.

It is a simple process, but if you have a bad connection or dying module (s), there a couple of extra steps...easily done per phone.

Janse, if calling me is problematic, just text your number to me and I will call you.
You must log in or register to reply here.

Caster setting relative to what?