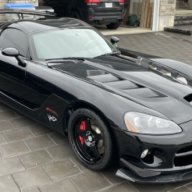 I've installed catch can on all my gas vehicles since about 2010, so when I picked up my Viper last fall, I knew it would be on the list of things to do to it as well.

What I hadn't ever looked at was just how ridiculously expensive so many things are for these cars. Catch can kits running between $300 - 450 USD was absolutely out of the question (I'm a Mennonite so I'm naturally cheap haha).

I bought a catch can off Amazon for $56 Canadian (~$45 US), which came with the large fittings that match the OEM fittings and hose size, so I bought 3' (a little extra) of 5/8" black fuel line for $10, and then the trickiest part was making a mounting bracket. Online, the red of the catch can looked like it would be closer to the Viper red, so thinking I should have maybe just bought a black one, but if I really feel inclined, that could quickly and easily be swapped out.

I didn't want to drill the crossmember, as much as possible I am leaving this car untouched, so I wanted a mount that worked without drilling or tapping anything. After seeing a can that utilized a clamping system around the crossmember, I came up with my own design and had a friend bend it out of 1/8" aluminum. He actually did this for free for me, so I spent a grand total of $66 Cdn on this entire setup.

The bracket is just slipped over the crossmember and bolted together, I put some 1/16" rubber lining on each side so it doesn't rattle, and the catch can fittings are what actually hold the can to the bracket. Overall, I'm quite happy with how it came out!

Nice job, looks good. Where in Canada are you? Is that can vented to atmosphere or you're recirculating the gasses back into the intake?
OP
OP

proedge said:
Nice job, looks good. Where in Canada are you? Is that can vented to atmosphere or you're recirculating the gasses back into the intake?
Click to expand...

Thank you sir. The can is recirculated back to the intake, but it did come with a filter that can ***** in on top where the silver plug is currently. With the way the can is mounted, the filter wouldn't clear the hood when closed I don't think.

I currently live in southwest Ontario, here for another year before I'll move back to Manitoba, south of Winnipeg where I'm from originally.
You must log in or register to reply here.