Purchased a white mamba last April. Inside top of door panel plastic trim on both doors were gone or cracked to pieces. Tried ordering replacements from dealer, aftermarket, etc. Was told good luck getting anything. One aftermarket guy told me to just put tape over the space, like everybody else was doing. Didn't seem like the thing to do to a collectable car. Long story short, I have produced a poly carbon 3D printed replacement part. Had several Viper people look at the installed parts and have received very favorable response. Considering making more parts, but since I don't work for $10/hr anymore, these parts will probably cost around $200 a set. The parts are finished with a UV protected paint and install easily with a 3M double sided tape.

I'm posting to get feedback on member interest and the possibility of making a 20 set pilot run. Anybody interested? I can text or email pictures. 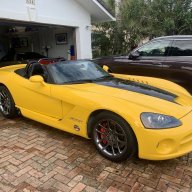 Post some pictures and you likely will get some buyers. My left one is starting to come up so I may be a buyer as well.
OP
OP
T

Here's a couple of pics of the first set. The factory part is made of a .2mm piece of aluminum incased in plastic that has a rail on the bottom that is secured to the backside of the door panel with finger clips. On my car the top piece broke for what ever reason, leaving the rail still in the gap attached to the back of the door panel. My poly carbon part is much stronger and the 9mm tape secures the part to both the rail and material on the top of the door panel. I can bend my part considerably without any damage. Can't say the same for the factory part.

Very nice! This is an issue that has plagued the later gens for a long time, so I'm sure you'll see some interest pick up one the word gets around. Mine aren't super bad yet, but it does catch my arm every once in a while when I have the window down and rest my arm on the top while driving. I ended putting some black silicone down the edge of mine to sort of blend it with the door panel and try to prevent some of that instead of the tape approach.
S

I'd be interested in a pair for sure...........Mine are still in place with a little separation...but its only a matter of time 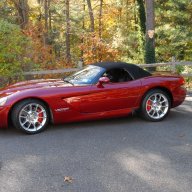 Thanks for your interest. I'll keep you posted on any future info on making these parts. 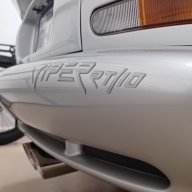 I'd be in for two. One on each door. The price seems reasonable if the quality is good. Looking forward to hearing more about this!
J

I would be in to purchase two, one for each door. Let me know if you do make them. It would be a great selling item for you.
OP
OP
T

John, I don't know much about Vipers, since this is my first Mopar. The part I made was for my 2004 Gen 3. Not sure this part is applicable to a Gen 1. 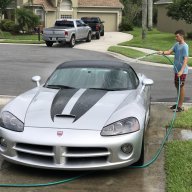 I'm interested. Can you describe how it is affixed again? Double back tape and a rail? Maybe a picture. Thanks in advance.
OP
OP
T

Well I have to say that the interest level for these door trim pieces is underwhelming. When I was looking for a solution for my car it was said that this is a common problem and no real solution. I've happily fixed my car, but the interest level to go any farther doesn't appear to there.

You might post on the Facebook page as well. You'll likely get a lot more eyes seeing it there than you will here. The forums used to be a lot more active, but they have turned into a bit more of an archive and tech section than the social scene that they used to be. A lot of owners are also not necessarily in a club period, so hard to say how much interest they would really be "in general".
OP
OP
T 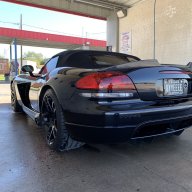 I just picked up an 06 and there is a strip hanging up. I'd be interested if things change and you decide to make and sell them.
H

Well my Viper came missing the driver side. I found black plastic trim used between when butting 2 pieces of paneling together. It's "T" shaped & fits where the molding was. Needs glued down, which I didn't do but found some automotive clips just like the clips that held the original trim. Works good, but looks cheap.
S

I would be interested in 2 strips, for my vert. stevensonjr

I'd be buying two as well.
J

i Have been reproducing the Door Trim for the last 4 years , It's improved and more Robust than OEM , with OEM Look .FCA Stopped making them 12 years ago .
You can reach me at 416 930 4049 . Text is best . Here is a link with many Happy customers .
Jay 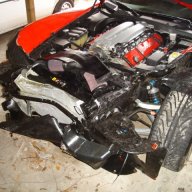 Nice! At least we have a place to get them now!

It would be nice to have a stick on solution!
S

Can someone do me a favor and measure the length and width of the pieces? My car is not here yet but I want to look around and see if I can find some automotive trim that might be able to go over the top of it, and if I do I will be happy to share. If I find some I could use the very thin 3M tape to attach it.
S

SketchyPete said:
I used the stick trim tape at O'Reilly and it's nice solution for $30
Click to expand...

Pretty sure it was this. It's enough to make two or three runs

Thanks, I will try to find some non-carbon fiber stuff as long as the width is correct.
You must log in or register to reply here.