For those of you that did not get to meet Cindy at VOI, she is one heck of a competitor.... and did a fantastic job speaking at the Viper Racing Tech Session.

The best comment she made was that she said the crew had so much less work to do once she switched to Vipers. The Vettes they were running took $30,000 of spare parts a year, after every race.. new calipers, rotors, control arms.. the list was LONG. Now that she is running the Viper, after a race... she goes out to dinner with the crew.

TOPEKA, Kan., October 5, 2006 – NayKid Racing opens testing today for the final race of the Sports Car Club of America (SCCA) Touring One (T1) class season here at Heartland Park Topeka (HPT). With the T1 class scheduled to take the green flag in its 40-minute race on October 14, the two-car, Dodge Viper SRT10 team has quite a bit of work to do to be ready for the winner-takes-all national championship event. Neither Cindi Lux (Aloha, Ore.) nor Scotty B. White (Puyallup, Wash.) has ever won the event despite impressive performances and dominating regular season activities in the past. Making the task tougher for the duo will be a recent rule change which will slam the V10-powered American supercar with additional weight leading into the season-finale. The additional weight might hurt Lux the most as she attempts to become the first woman, and the first T1 class driver, to ever win the SCCA’s prestigious “Triple Crown”.

Lux won six T1 races in the No. 78 KUMHO Tires/Dodge Motorsports/SRT/Nike/MOMO USA/Forgeline Viper on the way to her fourth Northern Pacific (NorPac) Division Championship. Of the six victories, one was the highly sought-after Kohler/Chicago Region June Sprints ® at Road America. Lux joined an elite group of women who have won the event multiple times with her 2006 victory. She is the only woman in the T1 class for production-based machines to win more than once. The 1999 American Le Mans Series Women’s Global GT Champion also won the “Sprints” in 2004. When added to the NorPac title, the June Sprints win gives her two of the three jewels in the Triple Crown. The third is a victory here at HPT in the Runoffs. Lux is the only woman to ever seriously threaten for the Triple Crown.

White had an impressive season of his own in 2006, rallying late to add five victories in his No. 3 KUMHO Tires/Dodge Motorsports/SRT/CORSA Exhaust/Red Line Oil Viper. Two early season incidents involving cut tires cost White a shot at a seventh Southern Pacific (SoPac) title but he comes to the Runoffs with a concentrated desire to walk-away with the sport’s biggest prize. NayKid Racing Viper SRT10s took second (White) and fourth (Lux) at the Runoffs last year with White earning the pole position with a new track record.

Despite intense head-to-head competition with other manufacturers, including Corvette, Ferrari and Porsche throughout the year, NayKid Racing enters the Runoffs at a distinct disadvantage to its non-Viper competitors. Effective September 1, T1 class Viper SRT10s were forced to increase their weight by 140 pounds, the only car in the class required to do so. That brings the total poundage for the few DaimlerChrysler products up significantly from their 2005 Runoffs fighting weight where they had already been slapped with a weight penalty and a choking air restrictor. The rules change came on short notice and with only one race left in the season to prepare for the Runoffs.

The penalties have been a constant challenge for NayKid Racing and Dodge Motorsports engineers. However, as they have done throughout the season, the group is committed to give it their all against the overwhelming legislative obstacles. Thus far in 2006, NayKid Racing has won 11 of 13 races, earned 12 pole positions and eight track records.

SPEED Channel will air each event at this year’s SCCA Runoffs on a tape-delay basis. Dates and times for the T1 class race are yet to be announced. Live timing and scoring of each session can be found at www.ssca.com.

Cindi Lux: “I am going to look at this huge weight penalty from a different angle than what I normally would do. I am going to view it as a compliment from the SCCA and our competitors. We have tried very hard to get the right manufacturer, tires, parts, crew and drivers for our program this year and we must have managed to accomplish this since everybody is scared of these Vipers! Being at a new location in Topeka will be fun. The track is a little narrow in my opinion and might be to the SCCA what Bristol is to NASCAR. Lots of excitement for the fans! With the Triple Crown on the line for us, it’s going to take a perfectly set up car and maybe a little luck thrown in as well. All we can do is the best we can and see what happens.”

Scotty B. White: “To say I am confident about this championship Runoffs race would be the overstatement of the season. What is really surprising to me is the amount of confidence other people have in this NayKid Racing team’s ability to get the job done in spite of the very obvious handicaps we carry into this race. Even though we are at equal power to weight with the Corvette and run the same size tire, we weigh 420 pounds more. Yet, people, including some officials and rules makers, have told me straight-up they just think we are ‘that good’ and we’ll still be able to get it done. All I can say is I know there will be two NayKid Racing Viper pilots on track that will be doing what they do every weekend… standing on the gas and fighting hammer and tong for that black and white hanky. Let the chips and tears fall where they may in the process.”

Mike Accavitti, Motorsports and SRT Product Planning and Marketing, Chrysler Group: “Dodge and SRT are once again pleased to be represented by NayKid Racing in the SCCA Runoffs, one of the most important and hotly contested events in racing. There's no better team to take the Dodge Viper to Victory Lane.”

Cindy and Scotty B -

Best of luck to you. You guys rock and the cars rock.

It really ***** to change the rules so close to the finish. I know you guys worked really hard - but - wouldn't it be cool if you won even carrying an extra 140 lbs

Probably doesn't matter in the long run. First the air restrictors, now the additional weight. Even if you won, they'd just make you compete with more air in your tires, water in your gas, jelly on your windshield or some such handicap.

Go get 'em. We're counting on you.

Congrats to NayKid Racing. Keep up the great work!!!
W 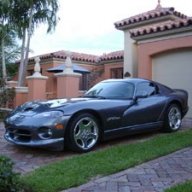 Hey guys, thanks so much for the encouragement. It really is pretty cool to have the support of the Viper community. This week at the runoffs is going to be pretty interesting. The folks over at GM camp are certainly playing some games.

But the wild card in my opinion is still the Ferrari's.

But all we can do is drop our visors when the green flag drops and let the war begin. Scotty and I are just going to run as hard as we can with our awesome race cars. We just completed a couple of days of testing and the cars are handling great. These cars truly are amazing.

Hope to do you guys proud. Will keep you apprised through out the week.

Thanks.
You must log in or register to reply here.