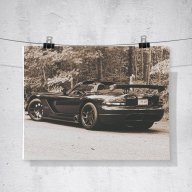 Searching for a set of rear Michelins for my 2003 convertible (345/30ZR19). Assistance greatly appreciated.
J

I couldn't find Michelins for my 2004 SRT (60 day wait) so I went with Toyo PROEX888 all around. 18s front and 19s back from "the tire man" I now have "low tire" message. The tire shop checked all tire pressure senders and the dash unit was good, and got a message on their readout (instead of a reset code) that said it would have to be reset at the dealer. The local dodge dealer service dept. had no idea about resetting the alarm (low tire) Anyone have this problem?

My 04 was weird with tire pressure sensors as well. I got a set of cloneable sensors and copied the original codes for them so I wouldn't have to reprogram anything for my second set of rims and initially it worked fine. Then a while later when I swapped the original wheels back on I would sometimes get a constant chime as soon as I started driving. Checked the pressures and everything was fine, and they were the factory sensors even. My factory ones finally gave up the ghost a little while ago so I bought a second set of clone sensors and programmed those as well and had similar issues from time to time. Finally just tried reprogramming the module in the car since I have a DRB III and that seems like it has fixed the issue for the most part. One time the other day I had the constant chime again, but that's the only time it has done it in probably a few years since the reprogram.
J

"The tire man" is a tire shop in Lake Havasu City, AZ. I believe it is a chain but not sure if it is in AZ. only or across the country. they tried to reset the sensors and dash but their programmer got a message that a Dodge dealer had to do it and the local dealer said they couldn't reset "a car that old" (2004). I found a shop that could order sensors at $108 ea. X 4, and $50 to program them. the tire will charge $20 ea. to install the sensors. kind of pricey to get the "low tire" message to go off. still thinking about it.
B

How many miles have you driven it since the new tires? I would put quite a few on her at different speeds before going through all of the hassle and expense that you are considering. Or call a different Dodge dealership or Viper shop.

These are what I have in my car now: https://www.dormanproducts.com/gsearch.aspx?type=keyword&origin=keyword&q=multifit tpms

They require their own programmer, but you can clone the IDs to match what is already on the car so you don't have to reprogram the actual module in the car (assuming it's not the problem in this case). Fairly reasonably priced as well, though they do require their own specific programmer I believe. My parents got me a kit for Christmas several years ago and I've programmed two sets since then.
R

phangz said:
Searching for a set of rear Michelins for my 2003 convertible (345/30ZR19). Assistance greatly appreciated.
Click to expand...

I just purchased a pair for my 05 thru Meekhof Tire. They have stores all over the state of Michigan.

Appreciate that. I just purchased a set of Toyo Proxes R888Rs recently.

W
On the road flat tire!

O
Looking for Tires for 04