One of a kind ACR. I am again interested to sell my really well built and completely sorted out Gen IV ACR '********' edition. It is an amazing example in a very desirable color scheme (like the show car on introduction of the ACR). Last of the great 'nanny free' Vipers, Nurburgring track record setter. This 2009 car has the 2010 transmission (the only upgrade for 2010), plus ACRX dampers and lots of other goodies like DC Performance heads and intake, Belinger race exhaust, Arrow vent kit and closeout panel, and too many others to list. Over 600 rwhp (approx. 700 HP at the crank). PM me your email address for a full build sheet. $140,000 invested. Its a steal for someone. I wouldn't sell but I have a new toddler at home and not getting any time to drive it. Priced below market, and none other with these upgrades. We all know the market on Vipers is ****, but if you are in the market for one, you can't beat this one. Get it while you can. 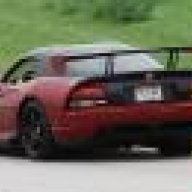 Good luck with your sale, but the 2010 did also have a redesigned rear spoiler, and in discussing about the 2010 transmission, it was essentially a gear change. The other small change was a short throw shifter in the 2010, which to many could be part of the transmission changes -- with the gears that would mean two changes to the full system. Your ACR sounds almost like mine, except I did not do heads , and hence I only have around 670 at the crank - and it is not for sale, ha.
Last edited: Oct 29, 2015
B

Thanks Bill, I have a B&M short throw shifter, which I prefer to the OEM that came with the 2010. Its a billet aluminum unit. Yes, the side planes on the rear spoiler were new in 2010.

My car dyno'd 538 at the rear wheels before I added the DCP Heads and Intake, and that was with the Belinger exhaust.

I guess I should also mention the car uses the MOPAR Offroad PCM. I haven't added the new upgrade so I guess there is a little more power there to be had.
B

I wish I was on the market...sounds like a great sorted out car
B

Pass the word, this car is certainly one of the best ACR's ever built. 658 NA rwhp courtesy of Dan Cragin.
D