Good news for the Central Jersey gen 1 and 2 owners..Buhler and the Cometric .. 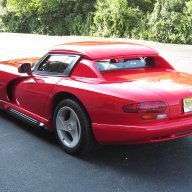 Buhler Dodge in Eatontown NJ was the biggest Viper dealer in NJ at one time..and will be again with the new 2013 Viper coming on line. They are very aware of the VCA, and praise the organization. Being a VCA member, I told Ken the head service manager that I would chronicle the service on the forum. He loved the idea.

First order of business, I went for a scouting visit to Buhler Dodge. Meet Ken the head service manager which we had chatted back and forth on the phone for a few weeks. He is very knowable on the subject of Vipers, as he has been involved with the program from day one.

We had a small meeting regarding the parts which will be needed on my 1994 RT 10 with 8,500 miles, such as new OEM head bolts, upper and lower manifold gaskets(OEM), Cometric gaskets from( Parts Rack) and all the other components required to do the head gasket repair. I raised the issue of the piston linings in an all aluminum block and so on, they were aware of it and had serviced many over the years..

The parts have been ordered and the car drop off will follow. It will take the Viper tech about two days to complete the task, with test driving the vehicle.

The Viper tech has over a dozen Gen 1 and 2 head gasket services under his belt. Very knowledgeable person, as he knows all to well about the inferior head gasket material issue used on the 1 and 2 Gen Vipers. The tech also added that he had completed a main seal service a few months ago on a 1998 Viper customer car.

In the next couple of weeks I will update on the outcome.

Chuck was only 105 miles away..... THE MOST knowledgeable person on GEN 1 cars in USA.

Oh well.. Make sure they change the thermostat, housing gasket and hoses while your heads are out. These will be the next things to rotten and leak over your ignition coils.
D

I don't know about the liner issue in the block. Do you mean dissimilar metals? Or, is there some common problem people run into when doing a head job?
V

DickDavis said:
I don't know about the liner issue in the block. Do you mean dissimilar metals? Or, is there some common problem people run into when doing a head job?
Click to expand...

No, the issue with Gen-1's [and to be honest, its barely an issue] is that due to wet sleeve design, you have to be careful of engine rotation without the heads on, or you can pop the liners out accidentally.

That said, it is mainly a concern on newer engines. The aged engines have liners damn near cemented in place with coolant silicates. Only engines to be careful with are NOS crate engines, or anything with a bit of rust in the cylinders.

With regard to the original topic, those are actually our gasket packages they were installing, and they have grown considerably in completeness since a decade ago. We can rid Gen-1/2 engines entirely of the OEM junk, and offer gaskets you will literally never have problems with.
You must log in or register to reply here.

Fuel level sensors for all Gen1 and Gen2s