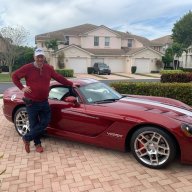 Hi Viper Friends;
I had a strange experience with my 2008 SRT 10. The car was shipped from the hot climate of FL to the very cold climate of Utica NY 32F and rain. When we unloaded the car it showed rather large,
5-10" white spots with streaks. In transit there was nothing that could have dripped onto the car.
We tried to remove the spots with all sorts of solutions to no avail. Finally we had to buff the whole car to remove the spots. There were some drip marks in the trunk even in FL. Since they did not show, I did not bother. When we got the paint of the car presentable again, I could give it successfully the final touch with Meguiar's 3 in 1 Wax to remove the last dull spots.
My question to you is: Did anybody have a similar experience? Does anybody have an idea, with what the car/paint was treated in the past? Did they possibly use a wax solution to preserve the paint, which turned hard and white with brush marks in the cold? Any suggestion would help, thanks.
B

Pictures would be helpful.

Would love to discuss this with you but there are too few details to dive in. Did you buy it and have it shipped, or was it your car prior to this transport? Can you ask the prior owner what was done to maintain and protect the finish? Was it a two tier transporter or just a single, closed or open?

As far as waxes, sealants, and coatings I don’t think I’ve ever seen one that is applied with a brush, certainly not a brush that would leave marks. As well they are all removed (buffed off) to reveal a smooth glossy finish. And your temperature change is not extreme at all.

It doesn’t match your description of fairly “large” circles with brush marks but Florida water in general contains enough mineral deposits to really wreck a car finish with white spots. It would be most pronounced on the horizontal surfaces where water can pool and then dry leaving the hard water spots that are now in your finish; they would need to be gently polished or compounded off in most cases.
Last edited: May 10, 2021
OP
OP

Thank you BYAIC for your input. May be I did not explain the situation correctly. The white spots were kind of a hardened white "cream", which we could not wipe off, and did not have any solution to wipe it off with. We buffed the car, removed this hardened "cream". The lighter spots we got rid of with a good cleaner wax. We still don't know what it really was, but believe it was a wax that hardened and shriveled in the cold.
B

Sennahnamrecken said:
Thank you BYAIC for your input. May be I did not explain the situation correctly. The white spots were kind of a hardened white "cream", which we could not wipe off, and did not have any solution to wipe it off with. We buffed the car, removed this hardened "cream". The lighter spots we got rid of with a good cleaner wax. We still don't know what it really was, but believe it was a wax that hardened and shriveled in the cold.
Click to expand...

I asked a few questions, it’s really hard to say anything different without more info. But I can explain to you more clearly that waxes, sealants, and coatings are very thin films. If it was wax it would still just buff off with a microfiber towel, waxes are not layer-able. Sure you can pour a bottle of wax on a spot of the car and let it dry and it will be difficult to buff off, but it will still buff off with a little effort, leaving that thin film. In practice, these coatings are always polished off within a few minutes or up to 20 minutes or so, leaving behind just a very thin film. That film will not be affected by heat or cold once it is cured, which can take up to a day; likewise, a thick layer intensionally poured on will cure in a day and also not be affected by temperatures and will respond to buffing with a microfiber towel.

What you describe is some sort of **** being dropped or thrown on the car and left to dry and harden. If the carrier was not enclosed that could have happened anywhere along the route, either accidentally or maliciously. If the carrier was enclosed the goop could have fallen from a car above yours; it could have been antifreeze, dirty rain water, or AC condensation (all of which dry white) from the car above. The “brush like” streaks were probably created as the material landed and splattered and movement of the carrier.

Anyway, good choice on a Meguiars product, love their products. You might try their Ultimate line of compound, polish, and Ultimate Liquid Wax instead of a basic 3 in 1 wax in the future. Quite a few steps up in car finish maintenance but it sort of becomes a religious experience over time. They also have a new Hybrid Ceramic line that is very durable, but won’t give the exact gloss, depth and super slick feel of the Ultimate products - but I’m being really picky, they do look very close. Or whichever brand, not trying to start a Wax War!
Last edited: May 19, 2021
You must log in or register to reply here.