We all know that for boosted GEN II cars, the best plug is the RC10ECC which is no longer in production by Champion (at over $10.00 each). There are others that many have used over the years from about every manufacturer out there...but none are the true .290 projected nose plug the the Viper loves. I just ordered a set of the QC10WEP plugs for my 13 PSI ROE GTS. No one in my area had them in stock so I ordered (10) from RockAuto for $77.50 shipped. They are the true .290 extended nose Heat Range 10 Champion plug pregapped at .028 (perfect for my application). Drawback is that they are the iridium plug and not copper core...but they state iridium holds a stable heat range across many operating parametiers so I will withold judgement until proven otherwise. They are the thin wire type which in reading their specs seems to be good for a boosted application. Also they are designed for Marine CDI ignition systems which means they operate on a lower voltage than "RC" plugs. So I will report back as to how they perform in my set-up next week. I doubt they will get here by this weekend.
P

would be nice it if holds up and no doubt you will be a test for the plus...

im sure you have read or heard about using iridium in vipers so i wont bring it up more than that.

report back and let us know
V

Unfortunately, it will be very hard to test a plug like this back-to-back without some type of true knock-logging equipment that is capable of picking up "ping" long before it would show up on a dyno graph or be audible. That would be the only way to be 100% certain short of the obvious drivability of them. The best way to test this would be to get a set of them on a car equipped with a Pectel or a Motec controller running dual knock sensors. I dont have anything ready at the moment... but I can swing this towards summer time when I am tuning some of the builds I have going on...
E

Yes...my use of the term "experiment" is a bit broad...anything you could "prove/disprove" would be of tremendious value Dan.
K

plumcrazy said:
would be nice it if holds up and no doubt you will be a test for the plus...

im sure you have read or heard about using iridium in vipers so i wont bring it up more than that.
Click to expand...


I think you are thinking about Platinum plugs. There is no problem with iridium plugs in boosted Vipers. I have been running NGK iridiums for several years now. The NGK iridiums run smoother than the RC10ECC that I tried on my car.

I'll be interested to hear how these perform.
P

that is exactly what i was thinking...im a dope

Been running the QC10WEP plugs for a few trips since installing. First impressions are good. Idle has completely changed (but my old plugs were way too cold and fouled anyways so who knows). Off idle stumble has improved and acceleration is better. Have not done any long WOT pulls due to cool weather (can't get traction) and haven't had the time for really messing around in various driving conditions. At least the car runs with them in and it doesn't sound like an outboard motor!
T

So the answer is Ir is not as good a Cu.

However, you can achieve the same heat transfer by increasing the area and it looks like the Thin Wire Ir plugs have done that: You have an internal core the same size as the copper, but the exposed tip is much smaller so the amount of heat transfer you need is now reduced and can be handled by the inferior Ir core.

But HT in the core will be inferior to Cu.

QUESTION: Why does the Viper like these extended tips? I seem to recall it is not a traditional quench wedge style and some other thoughts about some Mopar heads have two opposing quenches. And then there is plug location.
E

Never updated my experiment....the QC10WEP plugs shattered after a few spirited driving events. Didn't evidently hurt anything, but the ceramic insulators all cracked. So back to the tried, trusted, and true copper core NGK split fires. 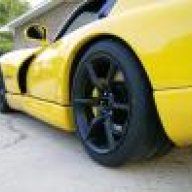 glad no damage occurred!
You must log in or register to reply here.