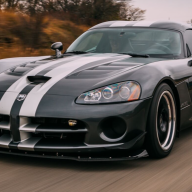 Hello, I'm new to the forum but have owned my ACR for several years. It has Belanger headers, Corsa hi-flow cats, K&N Typhoon Cold Air intakes, and the Arrow Racing Engines tuned ECU.

It has run like a beast until a couple days ago when it started running way down on power on the last hill before home. I barely made it into my shop with little to no throttle response then on came the notorious amber engine light. Put my OBD II scanner on the port and got the P2195 "O2 sensor stuck lean" code.

After a bit of research I decided to replace both upstream O2 sensors (there are no downstream). I also pulled out the two mass airflow sensors and looked them over for any dirt or obstructions.

After all this it started right up, I cleared the code, and let it warm up. When I got into the car to test drive it the throttle response went completely soft and it died as I was backing up.

I tried restarting it. The fuel pump came on normally, the car started, then immediately died in one or two seconds. After this happening several times I towed into my shop which is where it sits inop.

One additional note is that the battery barely turned the engine over when I started it up for the initial drive before all the described symptoms. I put one of my battery tenders on it overnight. Before trying to start it this morning I pulled the positive battery terminal off and then replaced it hoping a hard reset would do the trick. Tried starting it, same d&@ thing. No go.

Any words from the wise would be greatly appreciated! Thanks-Mike

Before you do anything else, I would check the battery voltage 30-60 minutes after removing the battery tender. This may give you an answer without much effort.
OP
OP

You were right on the money Steve. The battery voltage was just under 12 volts an hour after removing the tender. Hence, I installed a new battery and she fired right up. Thanks so much for the reply.
Semper Fi-Mike

Glad to hear it worked out for you..

Thank you for the followup, Sir.
H

My motor would tell you to remove the K & N filter. The oil can disrupt the Mas Airflow Sensor
You must log in or register to reply here.