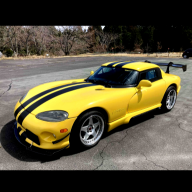 Hi everyone.
Please let me know.

My Gen1 sometimes makes a gunshot sound coming from the exhaust when I ease off the gas pedal during acceleration.

I am not sure if there is fire along with the sound.
(I think the exhaust also smells a bit.)

Is this a common occurrence with VIPER?

The exhaust pipes are Genuine parts.

I'd say that's somewhat typical, though usually not just from easing off the gas while still accelerating that I'm aware of. Vipers will pop and crackle when decelerating fairly often. My mom's 94 has done some bigger gunshot like pops every once in a while, but that's usually while driving around town. Excess fuel can load up in the exhaust and between the short length of exhaust on sidepipe cars and how hot it can get, the fuel with detonate in the exhaust giving that noise. You might be running a little extra rich if it's especially loud or common. If it's a totally stock system I'd wonder if maybe your O2 sensors are just getting a little weak and the car is running more rich than normal.
J

"BACKFIRE" is the common name, caused by unburned fuel. The Viper is programmed to close the throttle in essentially 2 steps. To over simplify, lets call it 95% closed on lift, then 100% closed about 1.0 sec later. This usually gives a pleasing (to most) burble, crackle.

Unburned fuel beyond normal can POP or POPPITY-POP in a back-fire Shot. [Be careful of your downshifting in some USA communities. Japan not so much! ]

In Japan we call this phenomenon "afterfire".
But I didn't use the word "afterfire" because I thought it was a uniquely Japanese term.

I'm glad you guys get the explanation.

I recently acquired this Viper.
The mileage is 44,000 miles.
I was told the plugs were changed 400 miles ago.
Wires may have been replaced as they are red wires.
Coil packs appear to be original.
The Oxy (O2) sensor should not have been replaced, so I'll start there and do some maintenance.

I was concerned because I heard "afterfire" is "engine scream".

In Japan, I can only drive 25-40 mph on non-highway roads.
It's not a good environment for vipers because they are constantly accelerating and decelerating.

Hmm, afterfire is actually a really good description and probably even more accurate than backfire. To me, a "backfire" typically brings images of an old carbureted car that is very poorly timed and shooting flames out of the carb, hence the "back" in "backfire". I know people use it to describe fuel igniting anywhere outside of the combustion chamber though, and I guess maybe it's because it's the "back" of the car.
A

I was always under the impression that this was caused by a slight difference on the tension of the cables that open the individual throttle bodies on each side of the engine on the Gen 1s. I can tell you that if they are not as close to the same as possible it will make it much worse. A very good Viper mechanic told me I could never entirely get rid of it on a Gen 1. Every once in a while it makes me jump a bit, especially in closed quarters like a parking garage but I don't really mind it. My gen 2 (which does not use the cables) never does it. I always thought that is why they changed the throttle design on the Gen 2.

I too like the name "afterfire" because it isn't really a backfire as it comes out the exhaust, not back through the carburetor. I have never heard it used before, but I am going to start using it to refer to this condition.
OP
OP

B
From Factory to Mosport Track Attack in 7 days...Bruce's new TA finally arrives