We had a great time at the grand opening of the new RidemakerZ stores at 12 Oaks Mall and Great Lakes Crossing today. In case you don't know what RidemakerZ is, its a store where you can build a model car and customize it however you want -- even make it an RC car. It's Build-a-Bear for boys!

Here's a link to the grand opening announcements and you can check out the rest of their site while you are there:

There were huge lines waiting when the stores opened.

Out in the mall were previews of the types of cars you could build.

The Viper Club had been invited because RidemakerZ were premiering the 2008 Viper as their newest model in conjunction with the store openings.

Chip Foose was made a personal appearance at each store, signing autographs and actual car bodies.

You'll have to wait until Sam and some of the others that attended post their pictures to see a lot more shots of Chip. We had our cars in a special corral in the parking lot and Chip came out and spent some time with us. They took all sorts of promotional pictures, some of which (including video) we hope to post here in the future.

Then we gave Chip and the CEO of RidemakerZ a "spirited" ride from 12 Oaks to Great Lakes. Larry Andreini, the CEO, had a great time. Michael Menuck even let Larry drive his car and his smile just got bigger.

We all got complimentary cars for attending the event, signed by Chip Foose. Terrific excitement for boys (and girls) of all ages. What a fun way to spend a Saturday!

Thanks SOOO much to Larry and all his crew from Ridemakerz. It was an awesome day ! We were really given the V.I.P. treatment. I will post some pics tomorow. A lot of great people associated with Ridemakerz and Chip Foose was a really nice guy and very generous with his time especially with the kids(even the big ones, LOL).
G

Great day. Thank you Ridemakerz for a great time. It was awesome to meet Chip Foose and the Ridemakerz group. Special thanks to Robyn Pass who coordinated the event. Robyn has promised to forward copies of the pictures and videos taken during the event which will then be posted on the MCVO site.

I can say it was beyond awesome to take Chip for a drive in the Viper. He indicated the acceleration was incredible (this coming from someone with a variety of specialty cars with much higher power/weight ratios). I liked the fact he did not even flinch when I went into a full boil in 2nd and 3rd gear while beside Bruce. Tires were not biting but it was still fun.

Anyone with pictures please get them to me and I will get them put up on the website.

Note for anyone that attended: We went back to the store today to build a few cars. We built the pink one Stephanie was admiring yesterday, as well as two Vipers. The coupon covered everything. Extremely good deal. The build process was a lot of fun and I recommend it to anyone who likes to hot rod cars.

A future Viper owner with Chip Foose. Note the kids (and some of the adults) got Viper key chains during the event from JonB at PartsRack. Great gesture Jon!

And here is Chip with Bruce as we are preparing to start the cruise from Great Oaks to Great Lakes malls.

And getting her car personlized with Chip's autograph and photo.

Ron, Michael and Bruce: Thanks for sharing your pictures. Looks like you had a great day and that the cars made a splash. Ron, thanks for all you did on Saturday. Maureen 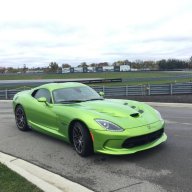 Just ordered a SSG 08 from them.
G

Like this? Pic of the 3 that we had Chip autograph.